Sketching by the sea

Here are two recent sketches I did while parked along the coast in Pacific Grove. As usual, click on each illustration for a larger, clearer view. 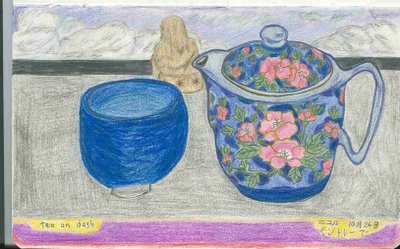 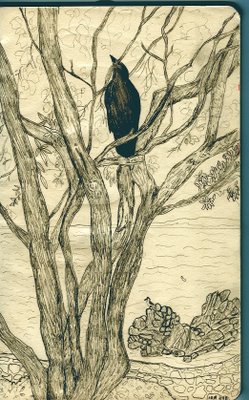 A ponderosa pine outside of Flagstaff, AZ. Elyse is my friend from junior high, highschool, and Flagstaff. We've known each other since we were 11 years old. The Chapel of the Holy Dove is a non-demoninational interfaith chapel on Hwy 180, the route North to the Grand Canyon from Flagstaff. The chapel is just outside of Flag. People reserve the chapel for weddings by pinning a handwritten note to the inside log walls. You can also place your handwritten prayers into a little box and the chapel people (I don't know who they are) will pray for you/recite your prayer. 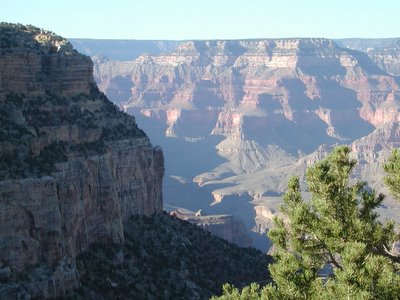 We camped at Mather campground--Yuki, Jesse, and I. The sky was clear at night with zillions of stars; the temperature fell to around 32ºF (0ºC). We were toasty in my tent--too warm even--because I slept in my flannel pajamas, inside a sleeping bag, and with a down comforter over me, next to a furry black cat and a furry white dog. 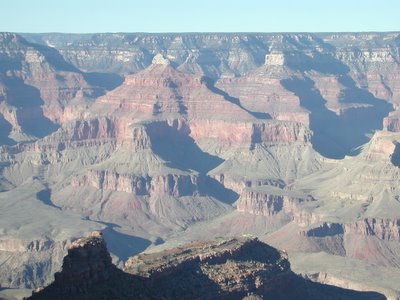 I enjoyed walking along the rim trail and revisiting places I'd been many times before. I never get bored of being at the Canyon, not even at the heavily touristy South Rim. Though I've been down on the river camping and walking for many days at a time, I can enjoy what the rim area has to offer. At the Kolb photography studio, built on the edge of the Canyon, there was a magnificent gallery exhibit of paintings and sculptures of the Grand Canyon created by various artists in many different mediums. In the Bright Angel Lodge area I visited an exhibit showing the history of Fred Harvey and the Harvey Girls, Grand Canyon tourism, and the visionary architect who created many of the structures at the Grand Canyon, Mary Colter. 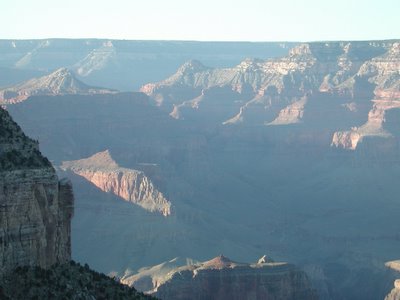 I asked Yuki to pose--this is what I got. 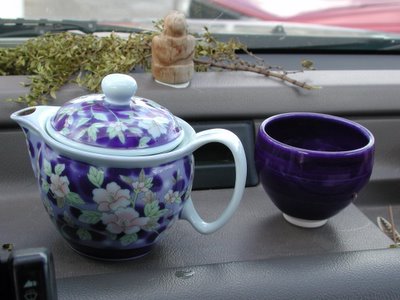 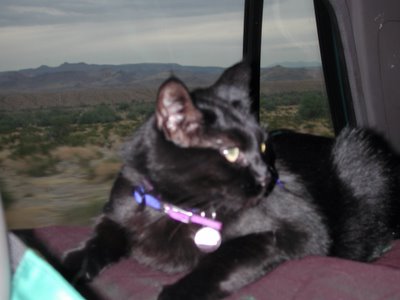 I took this photo of Jesse with one hand, shooting backwards while driving on the highway through the Mohave Desert. 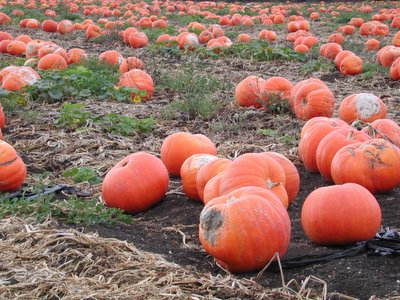 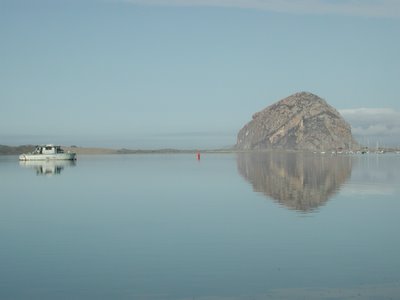 Morro Bay is one of my favorite stops going up the coast.
I like the look of that big rock in the water. It looms large from wherever you are on the bay. I took a walk with Yuki on a trail near our campground. The trail went past an area of many tall eucalyptus trees with hundreds of birds high up in the branches. There was a sign nearby that said this was a protected area, the only blue heron rookery left on the coast of California. I went back to the car to get my binoculars. Besides the blue herons, there were what looked to be turkey vultures perched among them. And in the background, that big rock in the bay. I don't know why, but I love that rock in the water like that. 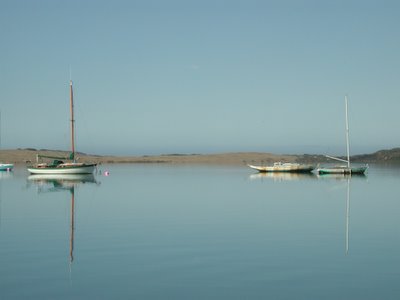 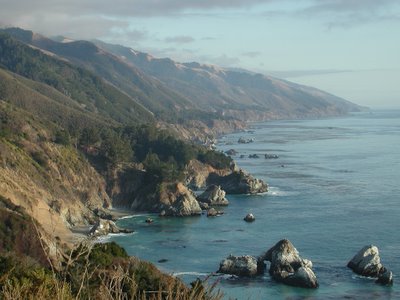 What else can I say--this is one view, at one moment in time, from a digital camera, under that particular lighting as framed by my eyes. The Big Sur coastline. This is at Asilomar in Pacific Grove. 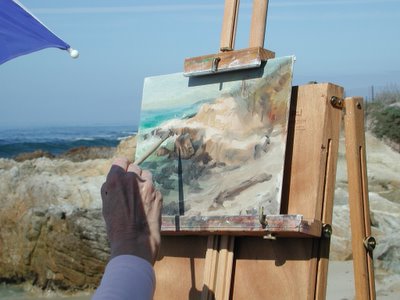 I met this painter at Asilomar on my first day back. She told me that she comes every year for a week just to paint. 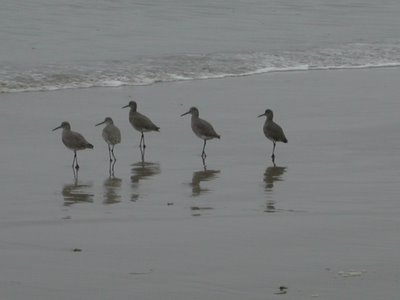 I saw these birds one morning on Monterey State Beach. 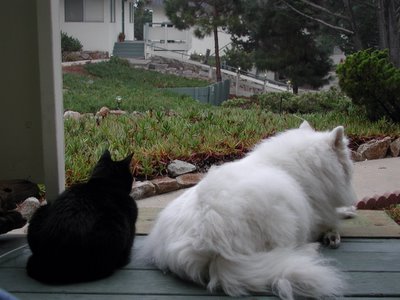 Outside, I was eating breakfast in the cool morning air while Yuki and Jesse were taking in the scene. We are on the porch looking out on the courtyard of the apartment complex of a MIIS friend we stayed with for a while.

One of the highlights I didn't photograph occurred at a vista point between San Simeon and Big Sur. I saw three whales on the horizon blowing water from their blow holes. I saw their bodies lift up into the air from the water followed by their flukes. I watched them do this several times. My first night's sleep in Monterey brought a dream in which I saw a dolphin face smiling at me and at the same time it felt like I was the smiling dolphin.

In LA, I stayed the night with my cousin in West Hollywood. Carol has lived in the same apartment for nearly 30 years! In the morning, I left in the dark, as Carol leaves for work at 5 am. Driving through the Hollywood Hills I saw the still full moon in front of me, hiding behind the clouds, and turning with me as we drove. There was a light misty rain. In the dark clear spaces between the clouds, stars were shining in the sky. As the road curved around the hills, lights from houses built into the hills sparkled brightly.
Posted by Nicole Raisin Stern at Saturday, October 29, 2005 5 comments:

Going on a trip -- be back soon!, originally uploaded by tortuga del bosque.


Yuki, Jesse, and I are packing up. Well...actually...I am the only one doing the packing; they are laying around watching me, and that is just fine.

We will spend a night or two in Northern Arizona, then on towards Monterey and another go at finishing my portfolio. We are looking forward to seeing the ocean again.

Tonight, Yuki and I walked in the Nature Park to the accompaniment of coyote song and a sunset sky ranging from orange-y yellow to deep cobalt blue. A lone bat did flip-flops over my head. The outline of the Tucson mountains to the west and the Catalinas to the north was crisp and clear. We saw Sophie, the little Jack Russell terrier, with her human companion. They were heading home. "It's nippy", she said. It was cool(er) at about 70-something degrees farenheit, but because I spent the past two years in Monterey, it didn't 'nip' me.

I'll be back soon--in cyber space, that is. A new journey is beginning for me. We leave on the first day of Yom Kippur, Day of At-One-ment.

Here are two poems to honor the new moon,
Ramadan, Rosh Hashanah, peace in ourselves,
peace between people, peace among nations,
and peace in the world.
I found these poems on Panhala.

What actions are most excellent?

To gladden the heart of a human being.
To feed the hungry.
To help the afflicted.
To lighten the sorrow of the sorrowful.
To remove the wrongs of the injured.
That person is the most beloved of God
who does the most good to God's creatures.

Not the peace of a cease-fire
not even the vision of the wolf and the lamb,
but rather
as in the heart when the excitement is over
and you can talk only about a great weariness.
I know that I know how to kill, that makes me an adult.
And my son plays with a toy gun that knows
how to open and close its eyes and say Mama.
A peace
without the big noise of beating swords into ploughshares,
without words, without
the thud of the heavy rubber stamp: let it be
light, floating, like lazy white foam.
A little rest for the wounds - who speaks of healing?
(And the howl of the orphans is passed from one generation
to the next, as in a relay race:
the baton never falls.)

Let it come
like wildflowers,
suddenly, because the field
must have it: wildpeace.

(The Selected Poetry of Yehuda Amichai, translated by Chana Bloch and Stephen Mitchell)
Posted by Nicole Raisin Stern at Tuesday, October 04, 2005 No comments: 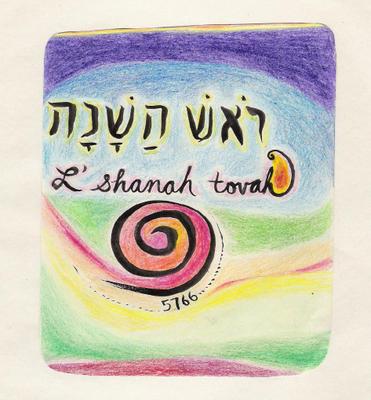 Just
to be
is a
blessing

Lastnight's dream~
I woke up with these words:

In the half dark, I wrote this down on a piece of scratch paper in red ink and went back to sleep.

Woke up again breathing quickly with my chest/heart feeling the strong beating energy of adrenaline pumping. I felt Jesse by my side and looked at her with relief.

In my dream, I was in a dry river bed or canyon, like the Rillito that is behind Darci's condo, just steps from the backyard. I was with Yuki in the canyon. Suddenly a huge olive-green flow of water came into the river bed towards us. We had to do something. I thought, "we must run." I saw a truck of people being evacuated. I banged on the truck, shouted that we needed help. I looked at the people and the driver but they didn't budge. No one would look at me. They ignored us and drove on.

Magically, we found ourselves on some other truck being driven out of the danger of being swallowed up by the river. But where was Jesse? I realized that she was not with us and I became very sad. Soon we arrived at the ocean front where the evacuation truck left us.
I went with Yuki to the beach, thinking it would feel relieving to walk along the shore to grieve Jesse. Instead, I saw Darci at the water's edge, holding an extremely wet Jesse. Jesse had miraculously, somehow, been rescued and was there waiting for Yuki & I.

I took Jesse and held her sopping wet body and was so happy. Jesse looked like pictures of oil-soaked birds I've seen after an oil tanker spill in Alaska. That's when I woke up and saw that Jesse was by my side, up near my shoulders; Yuki was on the cool tile near the head of the futon couch I sleep on. I felt so thankful that Jesse and Yuki were alive. I am so thankful that I am alive--that we are alive.

I went to my desk to read the dream words I'd written down and had already forgotten: 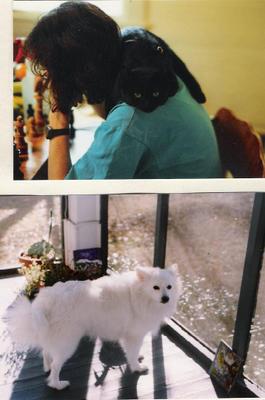 Jesse on my shoulders while I play chess; c. 1997.
Jesse is less than one year old then.