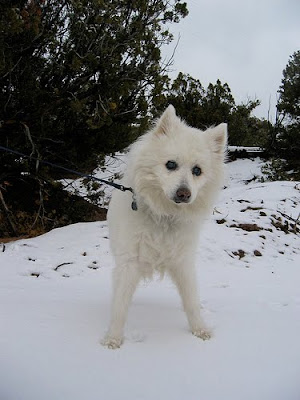 It's a beautiful morning again today, with the scent of orange blossoms wafting in the slightly cool breeze. Yuki is out in front of the house where we are staying; he sniffs the air and stares in one direction for a long time. He stands open-eyed with that quizzical, curious expression on his face that we call "adorable", yet I think his stance and look really spell confusion; he cannot hear anymore nor can he see with clarity. I am guessing that his eyes only sense shapes and shadows.

Yuki cannot hear the birdsong that I call beautiful and he turns around in circles when we walk, unsure of which direction to go, even when I think he will be able to follow my loud guiding claps. He cannot. In the standard dog-to-human calculation of age that we do, Yuki is 119 years old (17 in dog years) - an old man! Yuki has been my dog since I first met one of his puppy siblings at the tender and fluffy age of five weeks, and knew I must have one. Yuki resembled a snowball - hence, the fitting name of "snow" in Japanese: Yuki. We have been with each other all this time.
Posted by Nicole Raisin Stern at Sunday, March 21, 2010 No comments: 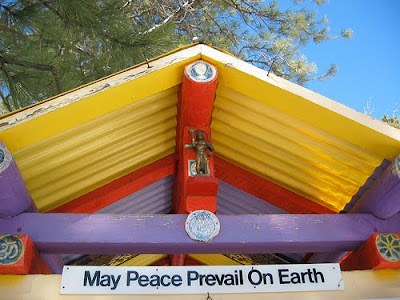 I was up in Flagstaff recently (late February, 2010) and went to see the peace shrine that Dr. Merchant had created at her colorful house on the hill. Her house always reminded me of Himalayan homes I have seen (in pictures) that are hand painted and decorated with Gods, Goddesses and symbols of Peace and Beauty. Dr. Merchant painted and created the beautiful peace shrine with the help of friends and former students over the years. 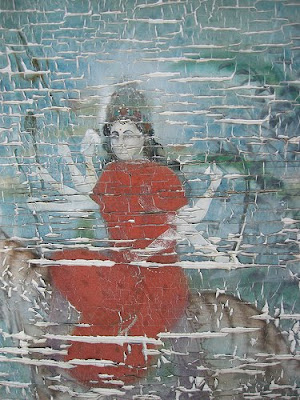 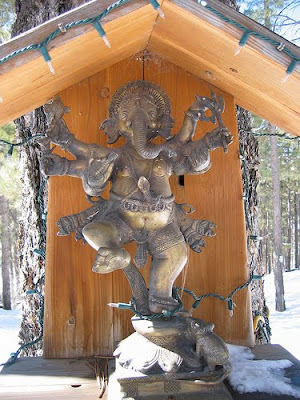 I was fortunate to have been a student of Vasant Merchant while at Northern Arizona University (NAU) in Flagstaff. I took all the Humanities and Religion classes that I could from her in my time at NAU and in Flagstaff (1979 - 1985).

After I moved away, I'd occasionally drop in to say hello and also to participate in a few special events at her house (for example, to commemorate Gandhiji, or Sri Aurobindo, Dr. Merchant's lifetime guru). In this "dog-eat-dog world" some may question the value of a liberal arts or humanities program, but I do not. Thanks to Dr. Merchant and her courses, thousands of us learned about world cultures and religions, especially those of India and the Middle East.

Dr. Merchant's courses attracted the international students of NAU, the non-traditional students (i.e., older students), and many of the Native American students on campus. She honored our learning, our language interests, always was curious to know what we were reading, cared about our individual learning styles and personalities, and was devoted to helping us expand our hearts and minds, which is one grand purpose of a Humanities education. 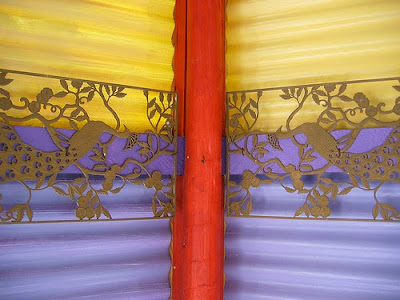 Dr. Merchant had donated to the Northern Arizona University Library a set of the translations of the Upanishads into French and English by Sri Aurobindo and the Mother. I remember reading some of these, sitting on the floor in the stacks, wanting to absorb something of this -- or her -- wisdom (and certainly of the wisdom of India and of Asia). In Dr. Merchant's classes, I first learned of Sufism ~ the esoteric heart of Islam, as she called it ~ and thus began my study and practice of Sufism. 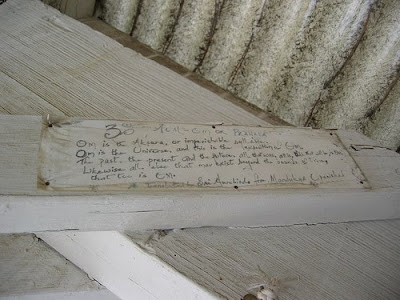 Om is the Aksara, or imperishable syllable. Om is the Universe, and is the textposition of Om. The past, the present and the future, all that was, all is, all that will be is Om. Likewise all else that may exist beyond the bounds of time, that too is Om.

The above photo was handwritten in Dr. Merchant's very distinct hand writing that I recall so well from her classes. Often, she would write favorite quotations on the blackboard, lines of poems and other bits of wonderful wisdom by writers, sages, scientists, teachers, thinkers, poets, and philosophers of the world and down through the ages. I clearly remember one of Dr. Merchant's favorite lines from Bengali writer Rabindranath Tagore:

Let my Love, like Sunlight, surround you and yet Give you Illumined freedom.

Underneath the quote she had written Tagore's date of birth and death (1861-1941), along with the year he was awarded the Nobel Prize for Literature for Gitanjali, 1913, and that he was the first Asian to win this prize (and the first non-European). 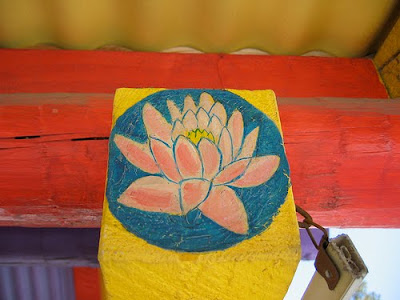 It was through Dr. Merchant's illustration and lecture on the lotus that I first became aware of the symbolism of the lotus and that we humans are like lotuses. The lotus that so beautifully opens up to the expansive sky, has its roots in and grows out of swampy, murky waters. 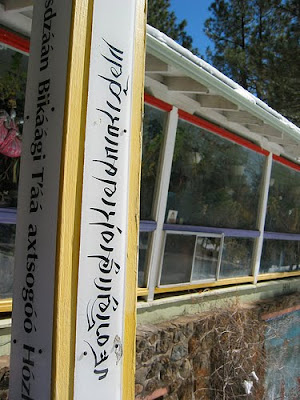 I also remember when our entire class went out to the movies together to watch the Flagstaff premiere of the movie, Gandhi. I remember memorizing Rudyard Kipling's poem, IF, because she handed it out to us and because I really liked it. I also read Plato and Socrates in her class... and learned of the international school at Auroville in Pondicherry, India, where the students all learned their various "subjects" through the medium of several languages, such as French and Hindi for literature, English for History, German (and maybe French, too) for Science, and Sanskrit for the sacred chants and literature of India. The students and teachers all began their day doing yoga together and they ate vegetarian meals sitting in the shade of a circle of trees... these are some things I remember from my classes with Dr. Merchant. 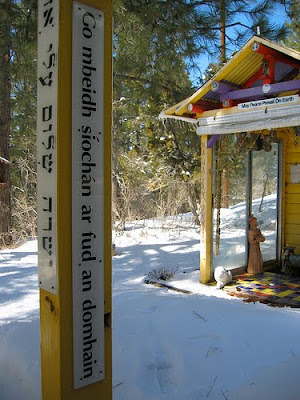 In 1995, an Indian friend from my high school days in the Chicago area, came to visit me in Tucson. We went on a camping trip up north to Oak Creek Canyon and then to the Grand Canyon. We drove in my little red Geo Metro 4-door hatchback and took Yuki along, who was only 2 years old at the time. My friend, Suketu, and I stopped in Flagstaff to visit with Dr. Merchant. We took her out for sushi and she took us back to her house to make us some puris for the road. When I had signed up for my first class with Dr. Merchant, which I think was in 1981, I had excitedly written Suketu to tell him of the Indian professor who I was drawn to for no other reason than that she was Indian. In my letter, I described a rather large woman dressed very colorfully in a sari with thick black hair piled up atop her head, decorated with plastic flowers and wearing bright red lipstick. I told how I had met her. It was class registration time at NAU, which took place on the indoor track. Professors sat at tables placed all around the track and we students walked around the track to sign up and/or find out more about the courses. I was heading for a table when out of the corner of my eye, I saw Dr. Merchant. Right then, I changed direction and walked straight to her table and signed up. The rest is history. I took every class that i could with her. My description of Dr. Merchant made Suketu laugh with warmth, for he recognized instantly that this was Auntie Vasant, a colleague of his fathers when Suketu was a young boy. I've always had "this thing" for India... and this was yet another happy coincidence to bring the wisdom of India to me. 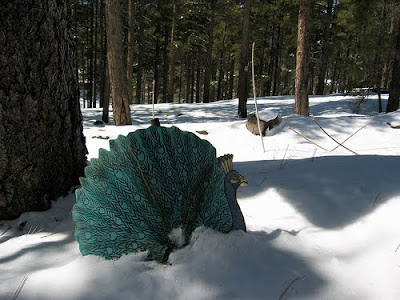 I am sure that, like me, thousands of NAU students have similar tales of being inspired to delve further into their hearts' interests by Dr. Merchant's skilful and enthusiastic sharing of many religions and cultures. Most of all, Dr. Merchant loved peace. She devoted her scholarship and insights to nurturing peace as the editor and publisher of the International Journal of Humanities and Peace (IJPH). In the shrine to peace she built outside her home, the phrase, May Peace Prevail on Earth in many languages of the world is inscribed in black on long white placards and posted to poles and on the eaves of her colorful house at the top of her hilltop street in the pines. Here, St. Francis, Ganesh, Hanuman, Saraswati, Sita, Ram, a peacock, et al, coexist. Here, Hebrew, Hopi, Arabic, French, Gaelic, Chinese, Russian, Zulu, Hindi, etc, intermingle. As in her humanities classes, the peace shrine offers a microcosm of internationality where each distinct culture ~ and language ~ is celebrated and allowed to be. I remember an article I read in Dr. Merchant's IJPH began something like this: "Peace is not merely the absence of war." The article invited readers to inquire into the meaning(s) of peace. I believe that Dr. Merchant's legacy is that we - all of us - continue to discover ways to nurture peace in ourselves, in our families, in our communities, between nation-states, and in the world. How do we do this?


Here are some of my ideas to create peace:

Dr. Merchant was Editor/Publisher of The International Journal of Humanities and Peace (IJHP).