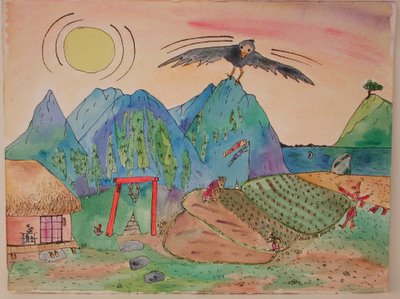 This is a watercolor sketch I made several years ago (in 1997, while living in Athens, Georgia). It's one of my Japan-inspired visions using a black ink Rotring drawing pen and liquid inks. It's amazing, curious, and interesting to me that our lives are 'populated by voices' (Bakhtin) and images from the cultures and people we visit and know. Even years later, these voices seep out into our language and art and acts. Maybe nothing is original. Maybe everything is.
Posted by Nicole Raisin Stern at Sunday, November 27, 2005 No comments:

Recently, I've been uploading much more to my Flickr pages and not as much here on turtlevision. Besides being a fun, international forum for giving and receiving feedback, flickr is a convenient place to archive my photos and artwork.

After a couple of weeks living in one of Kathy's upstairs guest rooms, Yuki, Jesse, & I moved into our basement room. New carpet was laid, the walls got a new coat of off-white paint, shelves were made for the closet in my room, I altered new curtains for the windows, put up noren (Japanese curtains), and brought in a new mattress. The room has now been Nicolized (as a friend calls it) for that Japanese-y ambience that is created wherever I live. 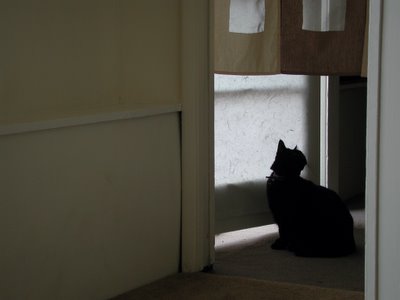 Jesse poised at the entry/exit to my room. 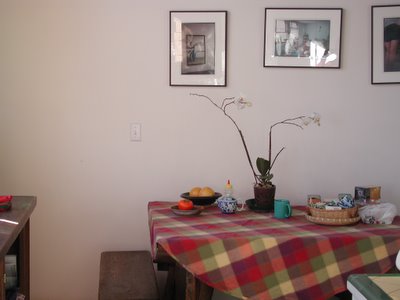 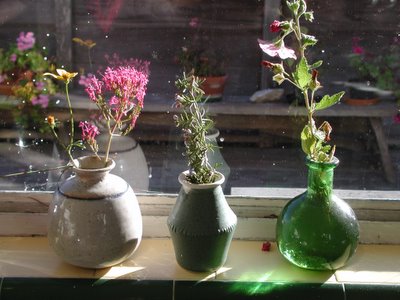 The vase place in Kathy's kitchen. 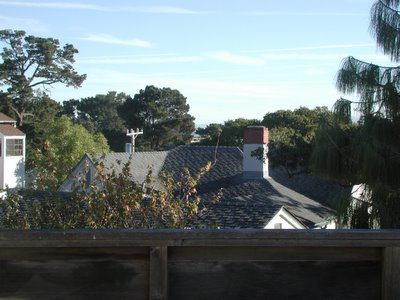 Rooftops as seen from one of the balconies in Kathy's house.
Posted by Nicole Raisin Stern at Sunday, November 27, 2005 No comments:

We all have a lot of plans and ideas about our lives. 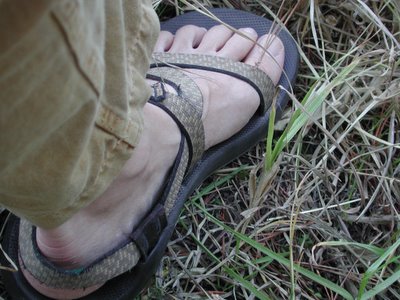 Yet, all we ever need to do is enjoy the step we are taking now.
To feel the earth beneath our feet is a gift. 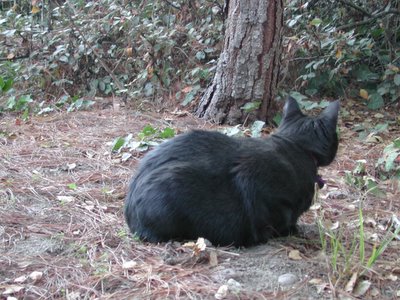 Posted by Nicole Raisin Stern at Friday, November 18, 2005 No comments: 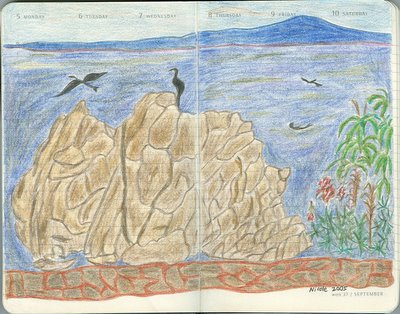 I've started using my Moleskine 2005 calendar book as a sketch journal. I rarely used it on a daily basis as a scheduler and there are a lot of blank pages left. This is my first drawing in this little book. The pages are 'onion skin' like and much thinner than my other Moleskine journals. 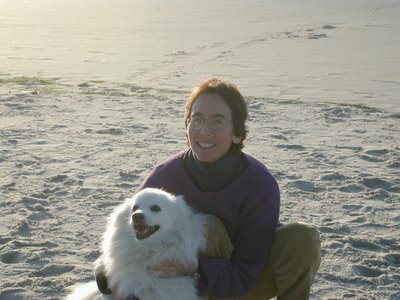 Here we are at one of our favorite spots on the Peninsula--Asilomar State Beach in Pacific Grove. 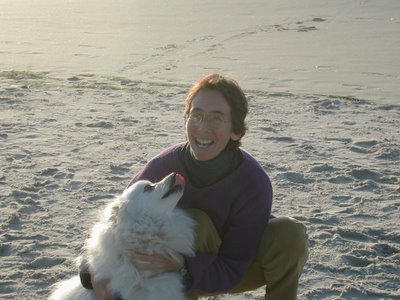 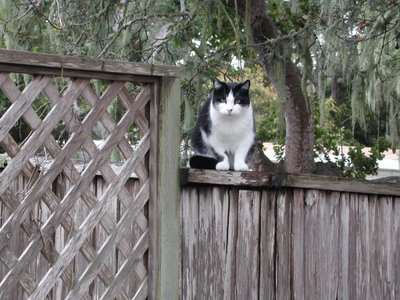 This is one of our new neighbors checking us out this morning in front of my friend Kathy's place, our new abode in Monterey. It's a suitable space for Yuki and Jesse, as well as being a supportive environment for me to finish my MATESOL portfolio.
Last night while walking with Yuki in the neighborhood, we met one of our wilder neighbors, a deer with antlers. 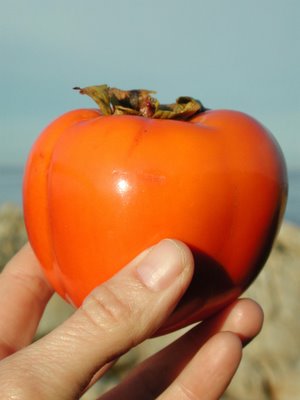 This beautiful orange apple persimmon was a gift from a friend I met recently who lives in her home on wheels by the sea. I gave her an avocado. 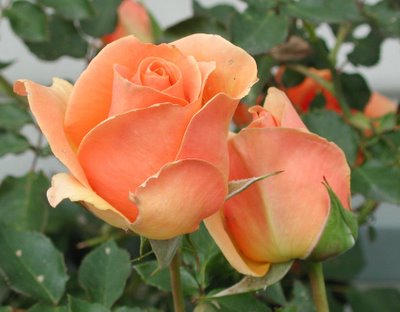 Some of my day today

This morning at the hostel I showed three travellers from Barcelona (Barthelona) how to make pancakes. Each morning, a bag of pancake mix and a griddle are supplied by the hostel, along with toppings like syrup, jam, and butter.
In an international environment such as the hostel, one notices that making breakfast pancakes is an American thing and quite unknown to others. The Japanese have okonomiyaki, Koreans also make a vegetable pancake, the French and Dutch have various types of crepes, and the Chinese have moo shoo with pancakes. But these are different than American breakfast pancakes. We even have restaurants devoted to pancakes or where pancakes are the main attraction. I showed the Catalan guests that the pancakes are ready for flipping when the surface of the pancakes are full of little bubbles. I made one batch of pancakes with mashed banana, cinnamon, and diced apples in it. I didn't go into the various names for pancakes: flapjacks, hotcakes....hmmm, what else are they called?
Later, I asked them if Catalán is taught along with Castilian Spanish in schools in Catalonia. Yes, they said, and in fact, Catalán is taught even more than Spanish now. I was happy to hear that, as Catalán was long suppressed under Franco. I then tried out the one Catalán song I know called Rossinyol. It's a very pretty song about a nightingale (rossinyol) that I learned about 25 years ago from Joan Baez's all-Spanish album, Gracias a la Vida. The Catalán guests said I pronounced everything in Catalán perfectly!
Later, while doing my laundry at the laundromat in PG, I went across the street to get a decaf americano, with room for cream, as a treat. As I was entering the café, I saw a group of about 12 people seated together at the tables outside. They were speaking French. I recognized Elizabeth from my exercise/dance class. Smiling, I greeted her with Bonjour! Ça va? Later, another group member invited me to join their French group. They meet each week at the café to speak French, including a couple of native speakers and Monterey Peninsula College French instructors. C'est chouette! Yet another thing to enjoy in my ever-expanding world of enjoying. I have also agreed to takeover leadership of the Thich Nhat Hanh sitting group from Nancy who is starting an additional evening sit at another location.
Later still, I ate a yummy leftover lunch while parked at Lover's Point with Yuki & Jesse. Lunch was farfalle pasta with diced fresh tomatoes and thinly sliced green onion mixed with olive oil and black pepper. I also ate steamed kale with lemon, olive oil, and a sprinkle of fennel pollen. The fennel pollen (grown/collected in California) was a gift I received in yesterday's mail from my friend Amy in Illinois.
After lunch, I heard my cell phone chiming its ascending "Calypso" ring. I've had this cell phone for two weeks. My first cell phone. It was Wanna, a MIIS friend from Thailand who currently lives in LA. She met me at Lover's Point and we walked and talked on the trail with Yuki. A beautiful day. Clear water, blue skies, and sunshine. We met lots of dogs--Yuki did the meeting, really, and the tail wagging. I noticed many birds in flocks taking flight in unison, sunlight catching the undersides of their wings as they flew together in the sky.
Posted by Nicole Raisin Stern at Saturday, November 05, 2005 1 comment:

I sketched this in the living room of the Monterey International Hostel. 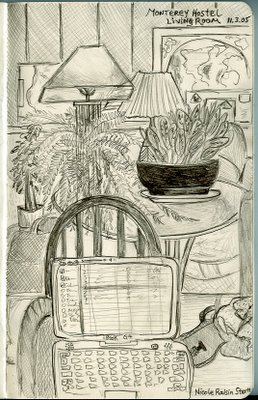